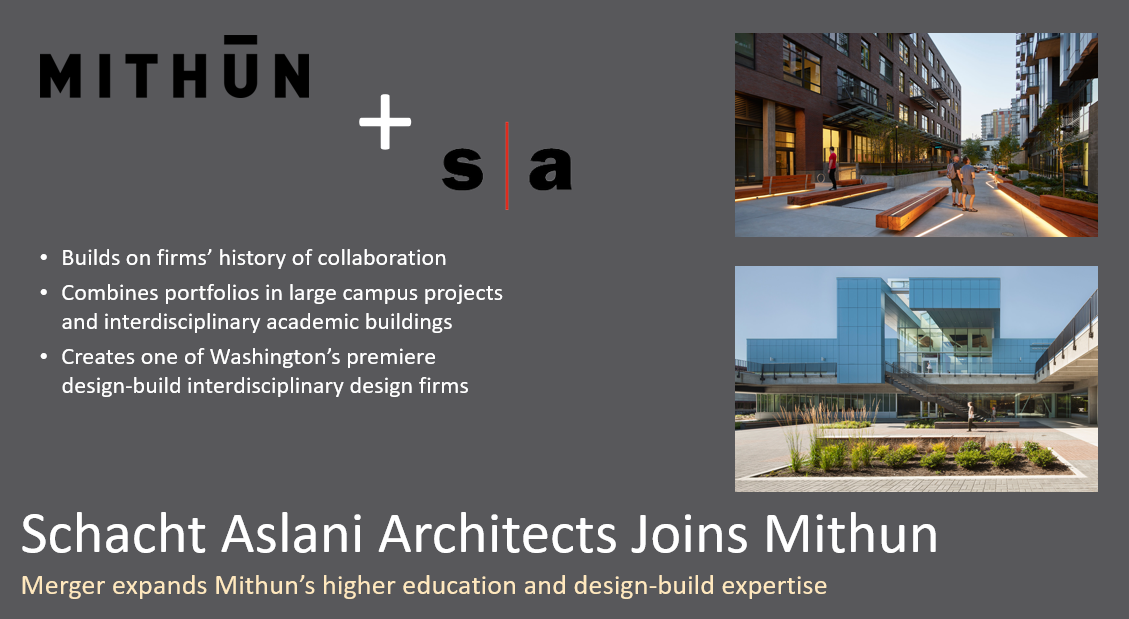 Mithun, an award-winning architecture firm with offices in Seattle, San Francisco and Los Angeles, expands its higher education and design-build expertise with the addition of Schacht Aslani Architects.

Mithun and Schacht Aslani have a long history of complementary expertise and professional collaboration, and this new union leverages the knowledge and client work of both firms for a wide range of projects. In particular, the merger builds upon Mithun’s work on large campus projects for leading higher education institutions, from UCLA to Princeton, with Schacht Aslani Architects’ expertise in interdisciplinary academic buildings, campus planning and civic projects. The expanded practice is well-positioned to deliver complex projects of scale throughout the West Coast and beyond.

“Growing the strength of our firm with such a talented team is a rare opportunity and we couldn’t be more excited about the partnership,” said Mithun president Dave Goldberg. “The Schacht Aslani and Mithun teams share values of modern, high-performing design, and a strong collaborative process that we believe is critical to serving clients and communities.”

““We share fundamental values about community, sustainability and design with the folks at Mithun,” said Walter Schacht, FAIA. “Joining their team enables us to leverage the value of our strategic approach to planning and design, increasing the opportunities to work on challenging academic, civic and cultural projects with ambitious design goals. "
Michael - thank you for your help and guidance throughout this process. We would have been lost without you.